Posted at 09:38h in normal by winfocus 0 Comments
0 Likes 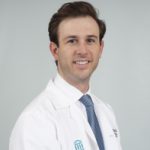 Robert James Adrian, MD is an Emergency Ultrasound Fellow at Harvard working as an attending physician at Massachusetts General Hospital and Brigham and Women’s Hospital in Boston.

He grew up in Arizona and graduated from Arizona State University with Bachelor of Science degrees in Bioinformatics & Genomics and in Sociology.

He attended Chicago Medical School where he earned a Doctor of Medicine and a Master of Science in Health Administration.

Within ultrasound, his interests are musculoskeletal and echocardiography. Ultrasound waves are only his second favorite type of wave–Rob loves to surf!